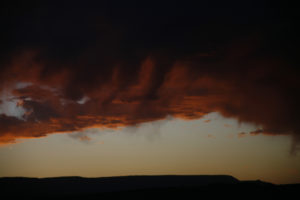 This ongoing series, Clouds, began in about 2009 while lying in bed lazily photographing through the window watching clouds trip along the horizon of the Jemez Mountains of New Mexico — which is why you see just a bit of the horizon. I had just moved to my new studio/garage that sits high above a canopy of cottonwoods. My casual cloud gazing with a camera to pass the time during pain flares immediately redirected my attention, and I noticed this was as effective as any painkiller. Just when I thought I couldn’t move, nor did I want to, I’d rise and follow a train of clouds photographing them through another window and then download and print them — most are miniature. I am lucky to have a generous subject.

For print sizes and availability: www.photoeye.com/laurietumer 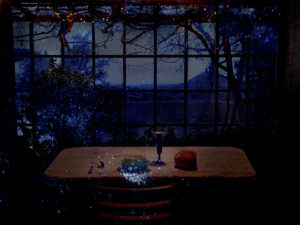 In 1998 I began looking for ways to visualize the invisible pesticides in our midst. I wanted to create images that would echo both the scientific and poetic quality of Rachel Carson’s writing in Silent Spring.  I found a muse in the environmental scientist Richard Fenske and his surprising research photographs used in safety training or farmworkers who use pesticides — the images not only make workers aware that these particles migrate, but motivates them to follow rigorous decontamination procedures when they return home.  Using Fenske’s fluorescent tracer technique, my photo-illustrations show how pesticides find their way off the farm, and into the sanctuary of our homes and on and in our bodies.  Many images in the series provide an update to Silent Spring, and sadly the use of broad-spectrum pesticides is as pervasive as it was in her time, if not more so. On this site, I have included the still and animated lenticular photographs in the series, the later allowing viewers to experience the seen and unseen in the same photograph — those I’ve simulated on this site with animated gif files.  The series was completed in 2006.  A monograph “Glowing Evidence” is in the works.

More images from this project can be seen at: www.photoeye.com/laurietumer 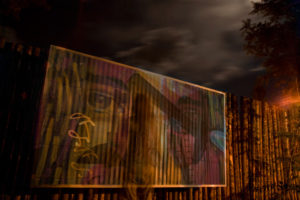 There are 6 images in this series, the result of an invitation in 2008 to participate in the exhibition “The Galisteo Basin Photography Project” presented at photo-eye Gallery.  Its purpose was to raise awareness about oil drilling impacting “the beautiful and fragile” Galisteo Basin, an area south of Santa Fe about 20 miles.  I was the only participant who did not live in the Santa Fe area, however, I learned through my meetings with the geologist at the state that the same oil drilling issues were impacting our “beautiful and fragile” Española Valley, 20 miles north of Santa Fe, with little or no attention being paid to it.   For my project, I joined a graffiti crew in the Española Valley to swap information.  My crew taught me (never mind that I was the age of their grandmothers) how to make stencils and graffiti because I was truly interested.  And I taught them what I was learning about fracking and oil drilling issues impacting our area that interested them. I was given the names of my crew by our local Graffiti Police Officer, who could not have be more supportive of my project, and he also gave me a boatload of retired stop signs.  So I met my crew in my yard, and we pored over drilling maps of the area that the state had given me, and I explained what I knew.  I created stencils of oil rigs that they sprayed these on stop signs that were then placed around town.  At the same time, I created a billboard in my yard that I used as a canvas .

The piece “Writing on the Wall” is held in the in the Governor’s Gallery permanent collection in Santa Fe, New Mexico along with images by other participants from The Galisteo Photographer’s Project.  “Writing on the Wall” shows a series of graphs on the wall in my garden of the economic downturn in 2008 and its relationship to oil drilling issues. Several of the images in this small series have been published in Robert Hirsch’s book Exploring Color Photography.  My interest in graffiti led me to teach the course The History of Graffifi: from Gylph to Graff at Santa Fe Community.  And the project became the seed for my next series:  Night Writer. 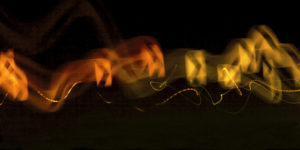 Night Writer is my homage to Española, the holy land, where I have lived for over 20 years.  It was conceived as a book project.  It is an odyssey in images and illustrated text of the transcendent and antidotal experience of one of New Mexican’s favorite pastimes — cruising.  These series of night drives as a passenger with a camera along the back roads produced mysterious images, such the highway numbers of the road traveled, the area code of the area, and some resembled graffiti-like tags with distinctive name, wild style, bubble and 3-D letters, and graffiti arrow motifs.  I literally used my camera ‘to draw with light’ – the very definition of photography, and the illustrated text reaches back to the art historical origins of graffiti in the ‘holy’ Illuminated Manuscripts of the Middle Ages. Essays are by Eddie Tafoya and me, in English and Spanish.

This series, that began in 2009, was completed with the publishing of the monograph Night Writer in 2016.

Night Writer All Torn Up 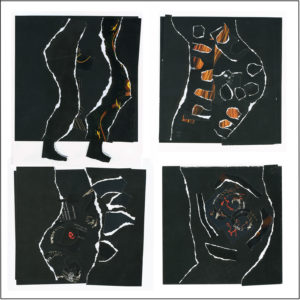 While the pictures in the series Night Writer were taken during and after the historic 2008 U.S. election cycle where there was great hope in the midst of an economic crisis,  Night Writer All Torn Up  was in response to the ghastly 2016 U.S. election cycle that paralleled the worsening of symptoms from multiple sclerosis.  The source material for these colleges come literally from tearing up my Night Writer book. The titles of the pieces reflect my dismay by regressive politics and uncertain political and personal future with titles such as: “No Cocktail Too Strong”; “Spine”; “Gut Feeling”; “Feet to the Fire; “Ripe Words.”

This series began in 2016.  The collages are photographed and printed in small editions of various sizes.  For additional information, please contact: gallery@photoeye.com 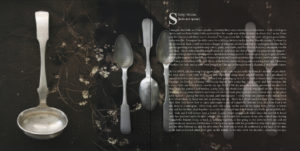 Heirlooms was envisioned as an alphabet book dedicated to my niece, Heidi, who was learning the alphabet when the project began.  It will be some years before she can read the stories. This is a mosaic of short illustrated narratives of my beloved objects — objects left behind by family members I knew and didn’t know, and some I’d collected or were given as gifts by friends.  While this memoir of flashes of memories and creations of the imagination are not bound by linear time, the alphabetic sequence mysteriously fit together. Some themes include: the impact of being an immigrant on the generations that follow; how we remember just enough and forget just enough to survive, the life work of slaying dragons; magical thinking, humor, and quests, and the grieving of one’s death during life.

Prints will available in late 2018 with the release of the book Heirlooms.

All Images on this site: Copyright 2018 © Laurie Tümer. All Rights Reserved.